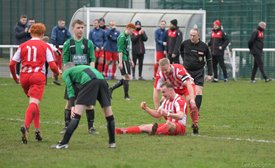 Wellmen move to 2nd place after win at Castell Alun.

The Wellmen returned from Hope with the points after a 3-0 victory over Castell Alun Colts.

The match got underway and the Wellmen very nearly took the lead in the first minute, a great move saw Dylan Allshorn pass the ball to Sam Jones, he turned in the box and lay the ball out to debutant Mike Walsh and his low drive was saved by goalkeeper Adam Thomas, then a couple of minutes later, Thomas was called into action once again and saved well from Sam Jones’ effort.
Castell Alun got themselves into the game and created a couple of chances, best one falling to Robert Darlington but his shot went wide of Mike Platt’s post. Shortly afterwards, a great through ball saw Marc Connolly on the chase but the keeper was alert to come out to gather the ball before Connolly could get the final touch on it. Connolly nearly broke the deadlock a minute or so later, a great cross in fro Jake Cooke saw Connolly rise well but his header was straight at Davies. Further chances fell to Sam Jones and Dylan Allshorn before the break but the Wellmen could not find the opening goal and the sides went into the half time break with the scores locked at 0-0.

The second half begun and the Wellmen pressed from the start looking to break the deadlock. A great though ball over the top saw Sam Jones chase the ball, and his attempted chip over the advancing keeper fell the wrong side of the post and out for a goalkick. Town went close a few mionutes later, Mike Walsh effort from outside teh boxthethered well by Davies, then a corner into the box saw Captain Tony Roebuck get up and head the ball goalwards but his effort fell inches wide of the post.
With the game an hour old, the deadlock was finally broken. A good break saw Connolly burst forward down the left hand side, his cross into the box towards Sam Jones was headed clear by the Castell Alun defender, but the ball found Luke Edwards on the edge of the box and his fierce drive finally beats the keeper and nestles into the back of the net…….one nil Holywell!
The goal lifted the Wellmen and another great cross by Connolly found Jake Cooke, but his header rattled the crossbar with the keeper beaten and cleared by the defender. The home side were then reduced to 10 men as Stuart Williams was shown a straight red card by referee Rob Duncan. Williams and Jacob Wise got tangled up getting up from a challenge, and once back on their feet, Williams lashed out and kicked Jacob Wise right in front of the referee who had no alternative but to send the Castell Alun Striker off the field of play.
Manager John Haseldin then brought on new signing Alec Williams for Dylan Allshorn and Town didn’t have to wait much longer for the second goal, as debutant Williams made it 2-0 with 72 minutes on the clock. The ball is passed through to him on the edge of the box, he controls then fires the ball home much to the delight of the Wellmen supporters standing behind that goal. Town went close through Connolly and Jones but the score remained 2-0 until the final few minutes then Luke Edwards grabbed his 2nd and Town’s third of the game. Alec Williams, who was having a great debut, fed the ball through to Connolly who’s fierce drive hit the goalkeeper and the rebound came back out and Edwards was on hand to fire home the rebound to make it 3-0.
The Referee blew for full time and the Wellmen had claimed another 3 points and after being frustrated by the performance of the home side goalkeeper, persistence paid off and the win saw the Wellmen move up to 2nd in the table, a point behind leaders Cefn Albion. The match also saw excellent performances to new signings Mike Walsh and Alec Williams, and they will be excellent additions to the squad between now and the end of the season.
The lads were applauded off the pitch by a large number of Wellmen supporters who had made the journey to Hope and the club appreciate their excellent support as always.

Next week see’s the Wellmen in Cup Action as we welcome Llay Welfare to Halkyn Road in the quarter final of the League Cup.